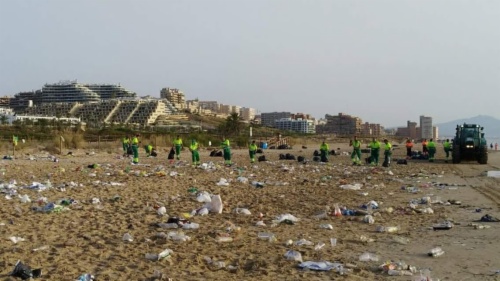 Bonfires of San Juan on the beaches of El Altet

Thank you very much, Mr. Mayor. Ladies, gentlemen, good morning. Mrs. Díez, on July 28, 1988, the Coastal Law was approved in the Spanish Parliament and on May 4, 2018, a Decree of the Consell was approved that implements the Territorial Action Plan for the Green Infrastructure of the Community Coastline Valenciana (famous PATIVEL). On June 19, 2019 through OMAC and with registration number 54648 we sent you our refusal to continue burning fires on the beaches of the municipality. Bonfires that hide behind them a macro bottle with the municipal approval, which even favors their celebration.

Said brief was also sent to the Department of Ecological Transition and to the General Directorate of Coasts, not having received a response from either his department or the department directed by his colleague Mrs. Mollà but from the Ministry for Ecological Transition. Said Ministry, through its Office of Environmental Information sent us a letter in which it considers that it is the City Council that must maintain the beaches in proper conditions of hygiene and health and guarantee the safety in the bathing places while raising awareness to the population so that these fires are made in locations other than the beaches.

This same document was sent to this City Council so that the appropriate questions were taken and therefore we asked them: Is this type of celebration going to be allowed again this year on the beaches of our municipality? Is this City Council going to continue to skip the law to continue allowing the realization of these hidden macro bottles with a supposed tradition of making bonfires on the beaches when even the neighbors of El Altet and Balsares do not even know that tradition? Thank you.

Thank you, Mr. Mayor. Thank you very much, Mr. Tristan. One of the highest obligations of an administration like ours is to ensure and comply with and enforce the laws. For this, mechanisms available to citizens are also used to enforce this compliance. In the case that you ask and as for the bottles, the Local Police of Elche has been working intensively in the control of these bottles in an efficient way for several years, which has allowed Elche not to become a bottle by having this practice controlled in small points located and controlled at all times by the security forces.
As for your question, which seems to be about the night of San Juan, I have to remind you of several things: first, for five years the government team, the previous one and the current one, we are working for tonight San Juan is practically limited and controlled by the security forces so as not to cause inconvenience and reconcile coexistence with the rest of the neighbors. Measures such as limiting a beach limit for this party that has allowed, as I said before, that the security forces, especially our Local Police, can have greater control.
On the other, at all times, the entrances to these accesses are controlled by agents of the security forces so that pallets and sharp elements such as glass do not enter the beaches and finally, I must tell you, Mr. Tristán, that the Last night of San Juan, that of 2019, the interventions of the Local Police dropped by 75% compared to the previous year, making this night a quiet night where the party and rest could be reconciled. Thank you.