The Ombudsman: «Education does not act with due diligence in IES Torrellano» 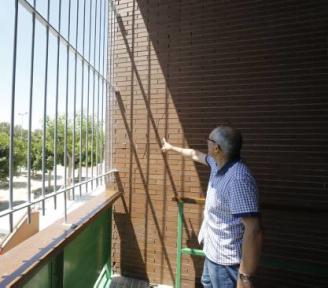 The Ombudsman, that is to say, the High Commissioner of the Cortes Generales in charge of defending the fundamental rights and the public liberties of the citizens by supervising the activity of the Spanish public administrations, has given a new tug of the ears to the Conselleria of Education due to the delay and lack of information about the repair pending for three years of a part of the façade of the Torrellano Institute. This is attested at least in the recent reply that from Madrid has been sent to Pablo Beneit, one of the parents of more demanding students of this center and representing others: "... in the opinion of this institution, given the time elapsed, the Valencian Educational Administration is not acting in this case with due diligence, since it has been more than three years since the problem was evaluated by the technicians of the Ministry ... ».

"The parents are outraged and ignored by the aforementioned administrations (City Council and Regional Ministry) and their representatives, who on more than one occasion, either through ignorance or intentionally, have misinformed us that the report could not be delivered to us because it was of a secret report. Whether it is because of ignorance or because of bad faith, I think it leaves a very bad situation to a government team that bases its electoral campaign on the answers and is able to place a billboard on the doors of the IES with the slogan " Answers "», says the father himself.

The report referred to is the one that, apparently, was developed at first to determine what security measures had to be applied in situ. And it is that the first problems in different points of the facade appeared in the course 2015-2016, episodes that later have been repeated in greater or lesser intensity, says Berneit.

«This only confirms the parents' suspicions that they deliberately conceal the truth and danger that children suffer when they go to the center on a daily basis, and leaves in doubt the transparency of the Regional Ministry and the City Council of Elche that, sheltering and reiterating the falsehood that the report is secret, has allowed children and staff at the center to assume the risk for more than three years, hiding the true situation of the walls to the entire educational community of IES Torrellano », adds the father . The most annoying parents insist that "given that it is false that the report is secret or confidential as we have been selling both from the Ministry itself, and from the City Council, the Spanish Ombudsman, under Title 1 of the Constitution Spanish, will request that we provide this report, since they are violating rights protected by the Law and the Spanish Constitution. It is also true that the Ministry of Education has informed the Ombudsman that on January 24 the repair work on the façade is already under electronic tender.